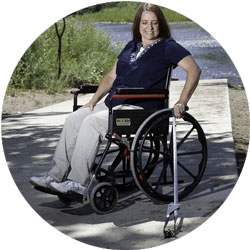 A pick up tool works like an extension of the arm by allowing individuals to reach things they might not normally be able to reach. With a squeeze of the “trigger,” individuals can grab onto things as large as a bottle of soda or as small as a toothpick. The pick up tool (commonly used for volunteer litter clean up crews) can retrieve things from high places or from the ground and make doing household chores and duties much easier for those with limited mobility.

The reach tool can be extremely beneficial in the kitchen, because individuals can use it to retrieve things from top shelves without having to use a ladder or step stool. Not only does it increase safety, but it prevents individuals from having to rely on others to get a glass or dish from the top shelf. With the pick up tool, those with limited mobility can obtain ingredients, dishes, and other items from top shelves, as long as they can squeeze the trigger on the reach tool.

In the Garden or Yard

Gardening or outdoor time shouldn’t be limited for those who have limited mobility simply because they can’t do all the things they once could. The pick up tool can help them take down and replace bird feeders and hanging garden ornaments, and it can even let them pick up garbage from the ground in their yard. Because the reach tool is so precise, individuals can pick flowers with it! It can make gardening fun again for those who are confined to a wheel chair, or those who can’t bend or climb anymore.

Pick up tools can even be useful on the go. Individuals with limited mobility or those confined to a wheel chair or power scooter can use the reach tool even during their grocery shopping. With the pick up tool, they can get items from higher shelves that they might not normally be able to reach, all without having to ask for assistance. It is even possible to use it to place smaller items on the conveyor belt at the checkout line. It’s a great benefit for those who don’t like to ask for help but usually must.

Other Benefits of a Pick Up Tool

There are other ways in which a reach tool can be beneficial for individuals with limited mobility. It can be used at the office to reach things that are otherwise inaccessible, and it can be used in volunteering situations to help reach items or pick up items that the individual otherwise wouldn’t be able to reach. The largest benefit of the pick up tool is the independence it returns to individuals that have limited mobility. With its use, they don’t have to rely on others to perform tasks that they couldn’t otherwise do themselves.

When using a reaching tool to perform chores around the house or duties outside the house, individuals should be able to trust that the reaching tool is sturdy and dependable. According to customers who have utilized the EZ Reacher that folds, it’s just not as sturdy as it should be. Alternatively, the Grappler holds strong and stays dependable during use. This is very important no matter what type of chores the user is performing.

The Difference between the EZ Reacher and Grappler

Weakness with the EZ Reacher

The flaw in EZ Reacher’s design comes in where it folds for storage. When extended, rather than having one strong, continuous shaft the way the Grappler does, the joint on the EZ Reacher becomes a weakness. Because there is a point of weakness, the EZ Reacher flexes or can bend and break at the joint. In fact, one customer had the EZ Reacher break on the second day of use when trying to pick up a 19 ounce can.  The customer said, “The part that broke is made of blue plastic and is apparently a weak spot between the two ends which are made of metal…” Other customers have said that when they try to pick something up, the EZ Reacher folds during use.

Why the Grappler is So Much Stronger

The Grappler is created from aluminum and made in the USA. There are no weak areas on the shaft of the Grappler reaching tool, which makes it ideal for picking up heavier items. In fact, customers praise it for being one of the strongest reaching tools created. Customers say things like, “The Grappler tool is made from heavier, stronger materials than most reaching tools,” and, “It has a wide mouth and a strong grip, and the shaft is rugged enough not to bend under quite a bit of weight.”

While the EZ Reacher may be a great household tool to use for very lightweight items, it’s not a safe bet when it comes to anything weighing over just a few ounces. Those who are looking for a great quality reaching tool to pick up kitchen items like cans, dishes, pots or outdoor work like picking up litter and trash should stick with the Grappler. Proven tough and strong enough to handle big jobs, the Grappler consistently outshines its competitors and performs well with all sorts of tasks.

The Grappler is created from aluminum and flexible rubber parts and is made in the USA.