The giant earthquake in Japan in March 2011 had a devastating effect upon that country. Tens of thousands of people were killed and hundreds of thousands of people lost their homes, cities and businesses. Millions of tons of debris were swept out into the ocean and succumbed to the currents and flow of the water. While much of this material sunk to the bottom of the ocean, a giant mass of bottles, plastic, wood and a host of other things have been slowly making its way to the shores of the United States.

Many people predicted that a lot of this debris from the tsunami would eventually make it to the shores of Washington, Oregon and Northern California, but it has arrived far sooner than expected. Everyday more and more material covers the shores and effects not only the beauty of the natural surroundings, but also the habitat of the wildlife. Many of these objects are very colorful and attractive to a variety of animals, but none of it can be digested and it has caused the death of thousands of animals, both sea based, land-based and especially birds.

Everyday, volunteers go out, comb the shores, and pick up the debris to clean up the environment and protect these animals. The sizes of many these objects are greatly varied with some being as small as a coin, and others being as large as a barge (sorry for the pun, but it’s true).

It includes such unlikely things as motorcycles, cars, boats, ropes, cables, oil drums, and yes sadly, even human bones. It has now greatly contributed to what has now been labeled the Great Pacific Garbage Patch and is estimated to be over one half million tons in weight. It’s also larger than the state of Texas!

Many people want to help with the cause and clean things up. They show up with their friends and start collecting debris and put it in trash bags, and come back again the next day and have to do it all over again. Its hard work cleaning all of this up and its possibly going to last for years to come. What is truly needed is a tsunami debris pickup tool to help people from having to constantly bend over to pick up this trash, especially the things you don’t want to touch.

Grapplers Inc. produces the perfect tsunami debris pickup tool with The Grappler product. It comes in a variety of lengths from 24 inches long clear up to 96 inches long with the most popular size being the 33-inch long version. This combined with “The Handler” which is a handle that attaches to a 5 gallon bucket, make the perfect combination of tools to pick up this unwanted debris left over from the tsunami. 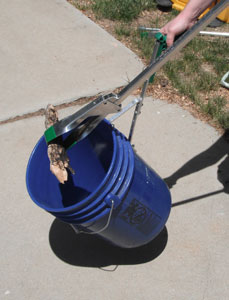 The perfect tsunami debris pickup tool is The Grappler from Grapplers Inc. and is available for immediate purchase and delivery right here.